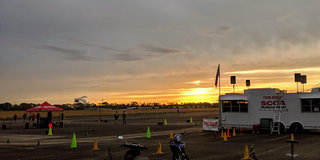 For the first time in 29 years, the Tire Rack SCCA® ProSolo® series traveled to Grenada, Mississippi this past weekend. While the competition surface is sought-out WWII-era concrete, a slimy layer of algae covered the course for the first couple shifts of cars. The rain and wind that greeted competitors on Saturday morning meant that grip was at a premium. The challenging weather conditions led to Saturday afternoon runs being cancelled. That evening, officials made the decision to extend Sunday morning competition to six runs (normally four) and cancel Challenge competition, awarding challenge points and prizes based on qualifying positions.

Many classes got the opportunity to take dry runs Sunday morning, but some faced damp or drying conditions. Street Touring Roadster took the course with damp conditions, allowing all competitors to improve over their Saturday times. While the class is dominated by roadsters, there are other cars classified there. David Whitener took the win in his new Mazda MX-5, but Joel Rhode finished second, 1.176 second behind in a 1997 BMW M3. Andy Neilson and Steven Hughes claimed the third and fourth trophy positions respectively in MX-5s.

Drying conditions dramatically altered the results of Street 2, made up of BSP, CSP, and SSP competitors. Buckie Maxey caught our attention Sunday by clearancing his fenders using channel locks on grid before suffering a sensor failure during his first run. He was forced to stand on his rain runs from Saturday, but after the sensor was replaced, his co-driver, Justin Mitchell, capitalized on the conditions to jump to the lead. Mark Prewitt and Bob Neff finished in the second and third place positions respectively. The fastest of the first drivers, Stanley Whitney, held onto the fourth and final trophy position as conditions improved.

Last month at the Tire Rack Dixie Championship Tour, Dean Rhodes drew attention with his fast-accelerating Tesla 3 in B Street. The spectacle was no different in a ProSolo environment, where the drag-race start rewarded the electric powerplant. Rhodes finished second, 0.376 second behind David Marcus in a BMW M2. Jeremy Foley missed the trophies in third by just 0.006 second.

We’ve been witnessing a decline of front wheel drive cars in Street Touring Extreme in the past few years, but the challenging conditions this weekend evened the playing field a bit. Raymond Dsouza took the win in his Subaru BRZ, but Jereme Mason and Jeffery Pierce took the second and third positions respectively in a 2007 Honda Civic Si, with Mason earning the final trophy.

It didn’t matter the conditions for Jordan Towns in Ladies Class 2. She was dominant both days in the Subaru WRX. After the dust settled, she retained a 1.524-second lead over Tara Johns in the second and final trophy position. This earned Towns the Ladies Challenge Top Qualifier honors. In open, Vivek Goel’s 1.278-second margin of victory in A Street earned him the Super Challenge Top Qualifier status. Due to the challenge cancellation, both were awarded the points due to the respective challenge winners.

The second Tire Rack SCCA CAM Challenge of 2019 drew 38 cars, making it the largest class of the event. Randy Atkins was victorious in CAM C, his second win of the year. Patrick Darling capitalized on the drying conditions on Sunday, rising from third to first in CAM T. Those same drying conditions drastically impacted CAM S as Steve Waters took advantage and claimed the class and overall CAM Challenge wins. The next CAM Challenge will take place in Crows Landing, CA April 26-28.

Complete results from the 2019 Tire Rack SCCA Grenada ProSolo can be found here.