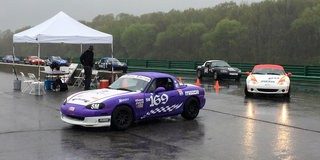 The Hoosier Racing Tire SCCA® Super Tour taking place this weekend at VIRginia International Raceway (VIR) has nearly 550 entries. While many Hoosier Super Tour events are well attended, the more than 500 drivers at VIR will make this the biggest Hoosier Super Tour weekend ever. But why is the VIR event so massively interesting to SCCA racers this time around?

The answer: VIR is the venue for this year’s 56th SCCA National Championship Runoffs®. So, this weekend’s two races on the circuit that curls through gorgeous, green acreage along the Virginia/North Carolina border gives competitors the opportunity to set up their cars and get some “seat time” on the 18-turn, 3.27-mile circuit with the hope of being better prepared for the winner-take-all championship scheduled in October.

The 2019 Runoffs will be the very first time VIR has ever hosted SCCA’s National Championship. The Runoffs, which caps the Summit Racing Equipment SCCA Road Racing program each year, has evolved into what is now commonly agreed to be the pinnacle of American motorsports.  Since 1964, the SCCA has crowned National Champions through the single race format featuring dozens of separate races over three days.

This weekend’s Hoosier Super Tour, as well as the Runoffs later on in the year, are both being hosted by SCCA’s North Carolina Region (NCR). According to Region Executive Sam Fouse, this is the first time NCR has hosted a Runoffs, but the Region is more than up to the task.

“North Carolina Region has a long history of hosting successful events at VIR, and we’ll do our best again this weekend even though the weather might not cooperate,” Fouse said. “Of course, we’ll be using this event as a practice run for the Runoffs, and will go back afterwards and review what we did well and what can be done even better. We’ll be more than ready to help make the Runoffs successful, and it’s safe to say these are exciting times for the North Carolina Region and its members.”

When it was announced over a year ago that VIR would host the Runoffs, SCCA Vice President & COO Eric Prill said, “We’re thrilled to take amateur racing’s most prestigious event to one of the most beautiful and challenging racetracks in the country, returning it to the Eastern United States for the first time since 2015. The VIR visit continues SCCA’s current practice of moving the Runoffs to different locations around the country each year.  And with the amazing track, facility and backdrop VIR offers, we’re sure the Runoffs will be a ‘must-attend’ for the Club’s entire membership and racing fans alike, and a fantastic way to celebrate SCCA’s 75th Diamond Anniversary.”

Recognized as one of Car and Driver magazine’s top six road courses in the nation, VIR draws thousands of spectators each year for some of the best road racing in the country. Its uphill Esses and sharp elevation changes not only make it a fan and driver favorite, but VIR has also received international acclaim and rave reviews as one of the most exciting road courses in all of motorsports.

Opened in 1957 as one of the country’s first permanent road racing circuits, VIR’s 3.27-mile track has remained exactly the same over the years, with the only change being widening some places to offer safer run-off room. The first official event at VIR was an SCCA race that attracted stars like Carroll Shelby, Carl Haas, Bob Holbert and Augie Pabst. The track is a fixture in SCCA racing and a favorite among racers due to its high-speed straights, challenging turns and dramatic elevation changes.

Connie Nyholm, VIR’s Owner and CEO, noted previously that the Runoffs at VIR could very well be the largest motorsport participant event ever conducted at the venue.

“I can't tell you how excited we are to welcome the best amateur drivers in the U.S. for the 56th edition of the Runoffs,” Nyholm said last year when VIR was announced as the host track. “SCCA sanctioned the very first race here, and again in March 2000 when Harvey Siegel and I re-opened the resurrected VIR. Having the 2019 Runoffs will be an important part of VIR's history."

If you can’t be at VIR for this weekend’s Hoosier Super Tour, you can still follow all the action with live timing/scoring, static cameras and Super Tour Radio presented by Hoosier Racing Tire at www.scca.com/live. But plan ahead now and mark your calendar for the October 8-13 Runoffs at VIR.  It will be a doozy.