‘18 DirtFish RallyCross Championship: Who Will Win 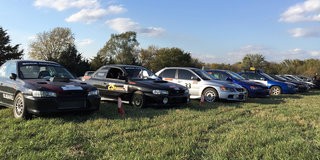 The 2018 SCCA® RallyCross® program concludes October 12-14 at the DirtFish SCCA RallyCross National Championship taking place at the National Balloon Classic Memorial Balloon Field in Indianola, Iowa. This is a return to the hard-packed grass hills of Indianola which last saw national-level action in 2016.  Morning fog, midday sun, and the possibility of looser dirt in the afternoon will make for a challenging event.  A potential for fall showers makes this an even more challenging event to predict RallyCross National Champions.

With Matt Wolfe opting not to return to defend his 2017 crown, the rivalry between 2015 Champion Donald Carl and 2016 Champion Chang Ho Kim should be returning to the fore, with advantage to Kim’s 2000 Acura Integra.  We can’t leave out the experienced Keith Lightfoot, who has consistently trophied at Nationals and who bested Kim in 2017 with a 0.95-second-per-lap gap.  Lightfoot looks just as strong this year.  The outside chance for victory may go to Hilary Anderson Frank who has some relatively impressive experience on sealed surfaces with Street Touring Sport and F Street Prepared vehicles in Solo.

Stock Rear departs from the Spec Miata class with seven models, ranging from a Chevrolet Camaro to a Porsche Boxster.  2017 Champion Sean Grogan returns to defend his title and should have the advantage with the Toyota MR2’s traction and power over Miata drivers, of which Howard Duncan should reign.  However, John Voegeli has been doing very well in the highly competitive Ohio Valley Region and may give Duncan a strong challenge for top Miata.  Logan Altmyer placed second last year and shouldn’t be counted out; nor should the Boxster of Ryan Miles and Daniel Shea, especially if the weather turns for the worse.

ZB Lorenc looks to prove that last year’s 0.7-second-per-lap advantage wasn’t a fluke as he tries to keep the nine combined Championships of Jan Gerber and Charles Wright behind him.  The advantage should go to Gerber because Mitsubishi has a stronger track-record of victories over Subaru, and particularly because Wright has a bad habit of selling off his championship winning cars.  Expect Karter Bollmann, a multiple Solo National Champion, to mount a strong challenge as he returns to RallyCross Nationals.  However, Josh Armantrout may spoil the Evo-Impreza party with a Ford victory.

Prepared Front-Wheel Drive grows to lucky number 13.  Will Robert Seelig’s luck turn for the better and allow his Honda CRX to defeat 2017 Champion David Capesius?  Capesius’ Dodge SRT4 has both the torque and local knowledge advantage.  Look for Erik Carlson to be a threat.  Carlson hails from the ultra-competitive New England Region and has bested National Champion Chang Ho Kim at several encounters this year.  Cunill is a previous multiple National Champion in rear-wheel drive and all-wheel drive.  Although he may not have much seat time in the Ford Focus this year, can he add front wheel drive to the CV?

The Prepared Rear class retains many of the same picks from last year.  Myles Goertz returns to defend the championship in the same car.  Shawn Roberts just missed out on a championship last year with a 0.7-second-gap-per-lap loss.  Roberts has been making incremental suspension and power improvements to increase his chances of victory this year.  Eric Adams’ lack of seat time last year proved detrimental, but his performance in the Colorado Rallycross Index Class shows that he’s improved his driving technique.  He’s bested Goertz and Roberts before, but can he do it again?  Of course, we can’t count out Gonzalo San Miguel.  Having acclimated to rear wheel drive over the past two years, he should mount and even stronger challenge this year.

Last year’s championship was closely contested between Mark Hill and Mark Macoubrie.  Hill only lost by a one-cone penalty plus 0.236 seconds and looks to make up for it this year.  Unfortunately, the local results don’t fall in Hill’s favor, with their only lineup in Kansas Region showing a 1.3-second-per-lap gap.  While it’d be easy to say that victory would go to Macoubrie, the relative lack of rallycross seat time compared to New Englander Harold Denham will prove an interesting battle.  Denham also returns to Nationals running the multiple-championship winning car of Warren Elliot.

With Leon Drake’s Rabbit Pickup defecting to the Constructors Class, Modified Front is set to be the second smallest field of the weekend at seven entries.  Bret Hunter’s supercharged Honda CRX should be the obvious choice for victory, if it holds together.  Andy Thomas returns with one of his Toyota Celicas and should mount a strong challenge if he brings the correct tires for the conditions.  All else failing, Scott Carlson or Philip LaMoreaux will be there to pick up the pieces.  They have been co-driving a Volkswagen Golf for several years and were able to gap Thomas at the East Coast National Challenge earlier this year.

2017 Champion Doug Leibman hopes to defend the championship, but Brianne Corn has mounted a massive challenge by winning all three National Challenges in the very well-prepared Mazda Miata of Peter Dozeman.  This car only placed fourth and fifth in 2017, but was able to show a 2-second-a-lap advantage when conditions stabilized on the last day.  Vaughn Micciche also has a well-prepared vehicle in the form of a supercharged Porsche 924, but lost to Corn earlier this year.  He also missed last year’s championship due to engine failure, so reliability could be a factor.  Don’t count out the better traction provided by the mid- and rear-engine vehicles piloted by Dan Hipwood and Leibman.  Unfortunately, Hipwood may not have fully come to terms with his V6 powered MR2 yet.  Another driver to watch out for will be Dustin Kirk.  He may not have fully developed his Toyota Corolla GT-S yet, but his driving skill has been displayed with a runner-up finish in 2016 and vouchsafed by those who know him.

At 22 entries, Modified All-Wheel Drive has the most Subaru entries, but we don’t really care about that.  Mitsubishi Evolutions rule, and four-time Modified All-Wheel Drive National Champion Warren Elliott is back in his Evo IX in Modified where he belongs.  He’ll face the Evo IX of Prepared All-Wheel Drive National Champion Max Lawson.  Lothrop Withington IV has defected the Subaru camp after last year’s second-place run and will be competing in an Evo X.  Subaru’s hopes will most likely be pinned on the stellar driving skills of Zachary Sober, better known for Solo Nationals trophies in his X Prepared Mazda RX-7.  Speaking of Mazdas, look for Bob Martin to pose a threat in his Mazda 323.  Martin has been competitive at the regional level against 2017 Champion Scott Banes.  And if you really don’t like Subarus, Eric Lassiter should be best of the rest in his Audi A4, having placed third last year.